Rooibos Products > Blog > Blog > Natural detox with Rooibos
Natural Detox with Rooibos
A body detox program can help the body’s natural cleansing process by:
Resting the organs through fasting
Stimulating the liver to drive toxins from the body 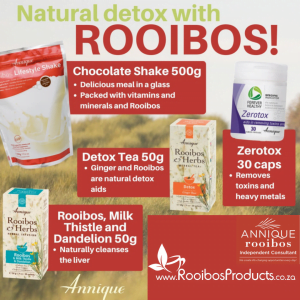 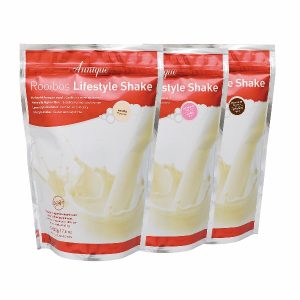 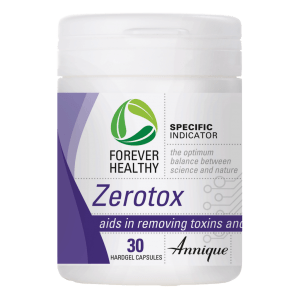 Heavy metal toxicity can have detrimental effects on your health. Zerotox is FDA certified, helps to restore organ equilibrium and is safe to use (it doesn’t get absorbed into the blood stream, but stays in the gastro-intestinal tract) even in severe cases. Absorbatox™ adsorbs toxins, changing its molecular structure and rendering it harmless, after which the body removes it naturally.

OptiClear acts as a sponge in the stomach and adsorbs the toxins produced in much the same way as a sponge soaks up water. In addition, it removes any foreign substances in the body. Assume, for instance, that a beer drinker has consumed 5 beers in 45 minutes. By the time possibly 2 beers would have been absorbed into the bloodstream, with the remaining 3 beers waiting in the stomach for absorbtion into the bloodstream.

Ingesting Zerotox capsules will sponge up the three beers in the stomach, effectively keeping the alcohol in the stomach until it has passed through the digestive system and out of the body.

The benefits of ginger root are well known. It improves circulation and removes toxins from organs. Ginger also promotes digestion and is ideal for weightloss. Combine with Colon Cleanse tea and Green Rooibos tea to perfect the weightloss support programme.

Antioxidants found in Rooibos tea can help protect you against damage caused by free radicals, leading to premature ageing.

Contains dandelion and milk thistle herbs that helps to cleanse, purify and regenerate your liver.
Rooibos can help improve the liver function and protect the liver against disease

I need help with…

We use cookies on our website to give you the most relevant experience by remembering your preferences and repeat visits.

By clicking “Accept All”, you consent to the use of ALL the cookies. However, you may visit "Cookie Settings" to provide a controlled consent.

This website uses cookies to improve your experience while you navigate through the website. Out of these, the cookies that are categorized as necessary are stored on your browser as they are essential for the working of basic functionalities of the website. We also use third-party cookies that help us analyze and understand how you use this website. These cookies will be stored in your browser only with your consent. You also have the option to opt-out of these cookies. But opting out of some of these cookies may affect your browsing experience.
Necessary Always Enabled
Necessary cookies are absolutely essential for the website to function properly. These cookies ensure basic functionalities and security features of the website, anonymously.
Functional
Functional cookies help to perform certain functionalities like sharing the content of the website on social media platforms, collect feedbacks, and other third-party features.
Performance
Performance cookies are used to understand and analyze the key performance indexes of the website which helps in delivering a better user experience for the visitors.
Analytics
Analytical cookies are used to understand how visitors interact with the website. These cookies help provide information on metrics the number of visitors, bounce rate, traffic source, etc.
Advertisement
Advertisement cookies are used to provide visitors with relevant ads and marketing campaigns. These cookies track visitors across websites and collect information to provide customized ads.
Others
Other uncategorized cookies are those that are being analyzed and have not been classified into a category as yet.
SAVE & ACCEPT
Cart
Checkout - R0.00